Last week I was going to St Louis and when I arrived at the gate at Midway Airport I stoped at the counter to check how full the fight was. Usually Southwest has very full fights but this was my lucky day. The agent told me their were approximately 35 open seats and when I told her I was already A16 we agreed I need not upgrade.

I was checking some emails on my laptop when I was summoned back to the counter by the gate agent.

She handed me an envelope. I asked what it was inside and she said she wan’t sure, so I decided to open it on the spot.

Inside was a Thank You note from the three terminal mangers for Southwest. Their was also a SW luggage tag and a business card holder that adhesively attaches to your cell phone. Two mundane give-aways but they were SW branded.

The Thank You was hand written and very thoughtful.

Two morals to the story; first always remember the power of a hand written thank you note! Secondly, while other airlines were making news for disturbing passenger interactions, my airline was personalizing notes and giving away trinkets to their best customers.

I’ll bet the total cost was under $2.00, but it was the personalized thought in an industry that has all but forgotten great customer service. Thank you Southwest for anther great experience.

What Should It Cost? 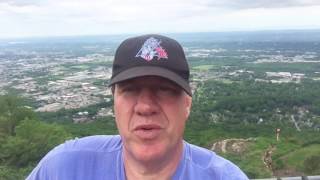 Getting to the Top!